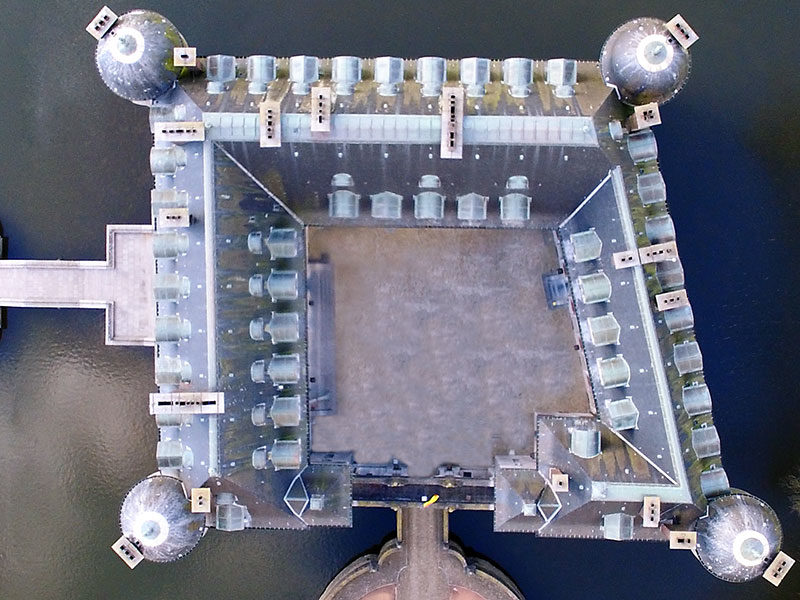 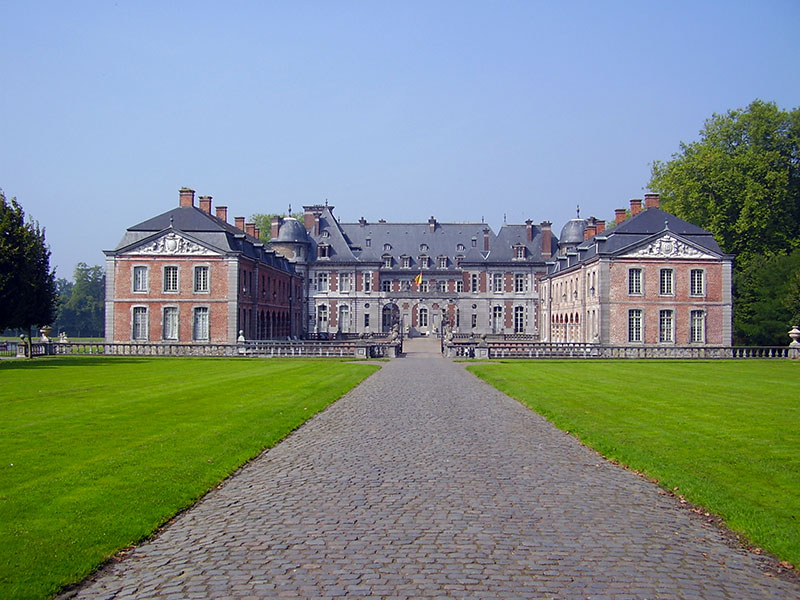 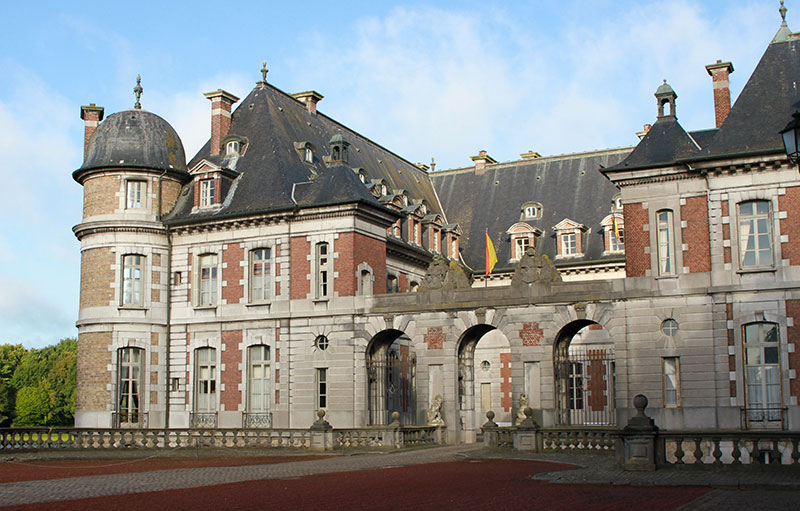 The visit of the castle starts with the hall. 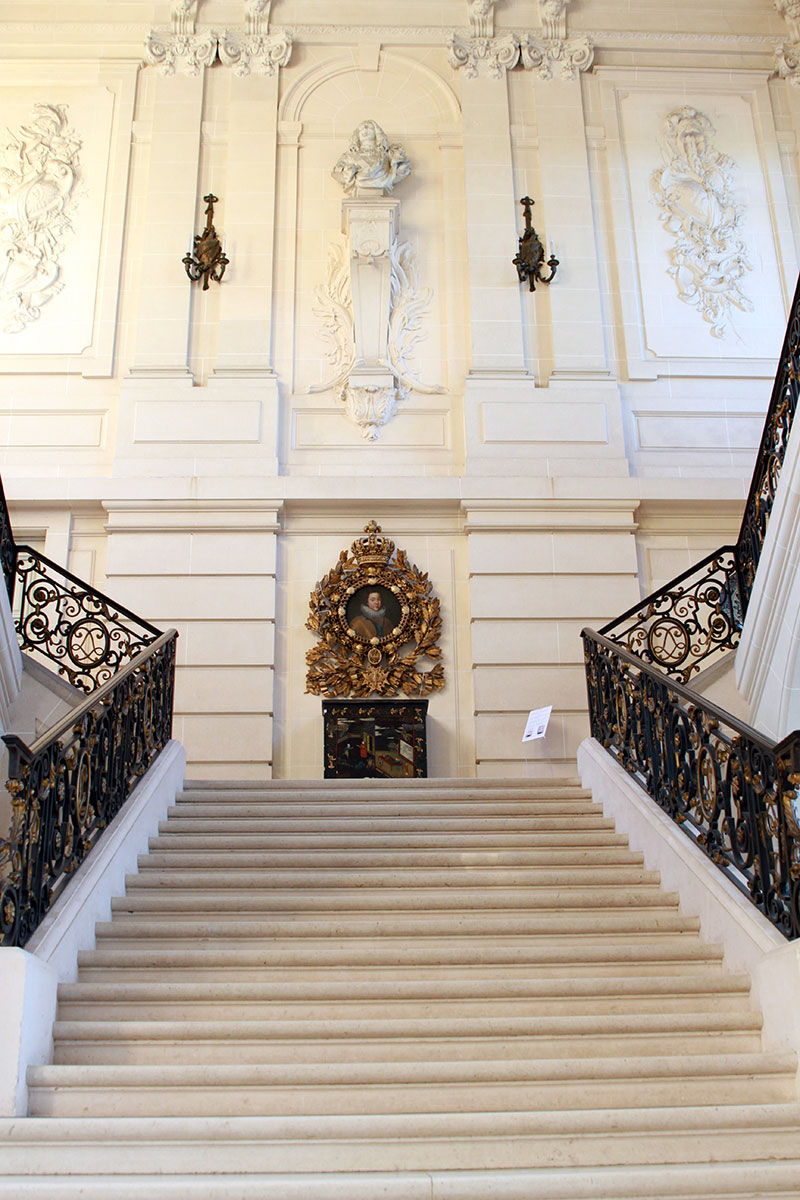 The two white marble busts are: one is Charles-Joseph, prince de Ligne, due to the chisel of Godecharle, Belgian sculptor (1750-1835), and the other is Catherine the Great, empress of Russia, by Delvaux (1695-1778). 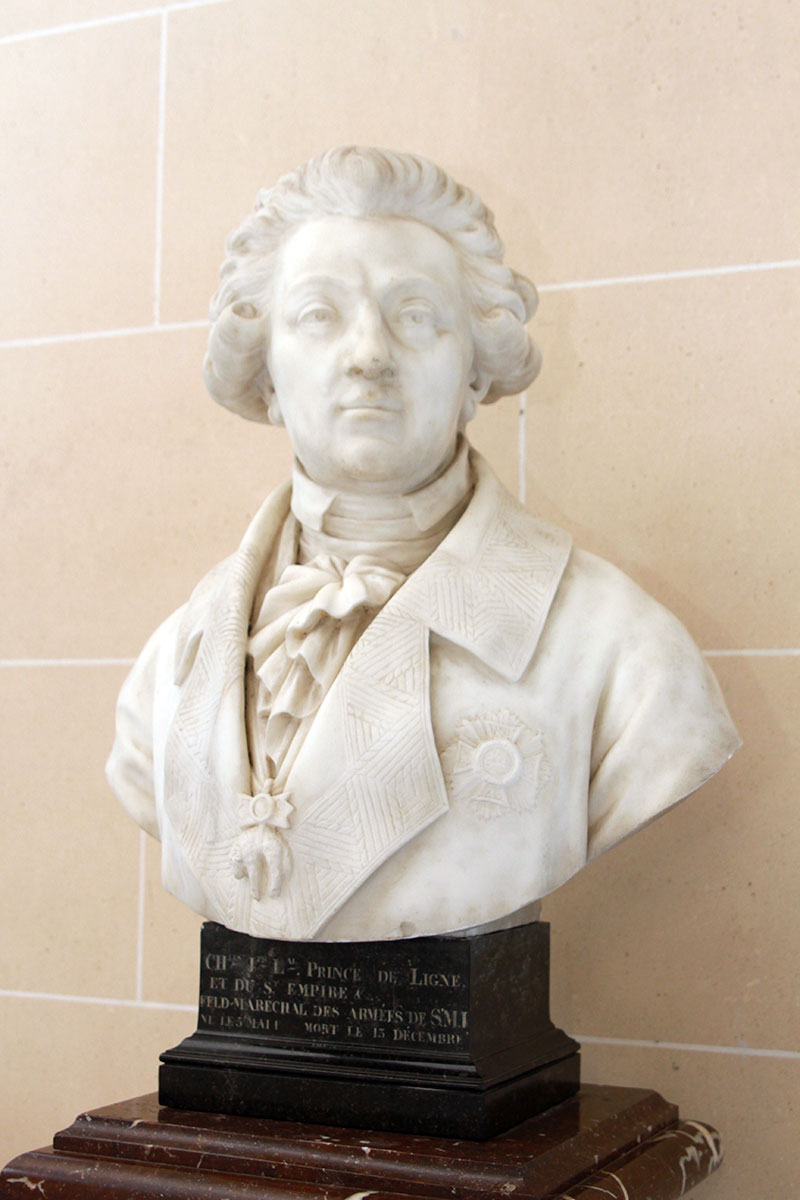 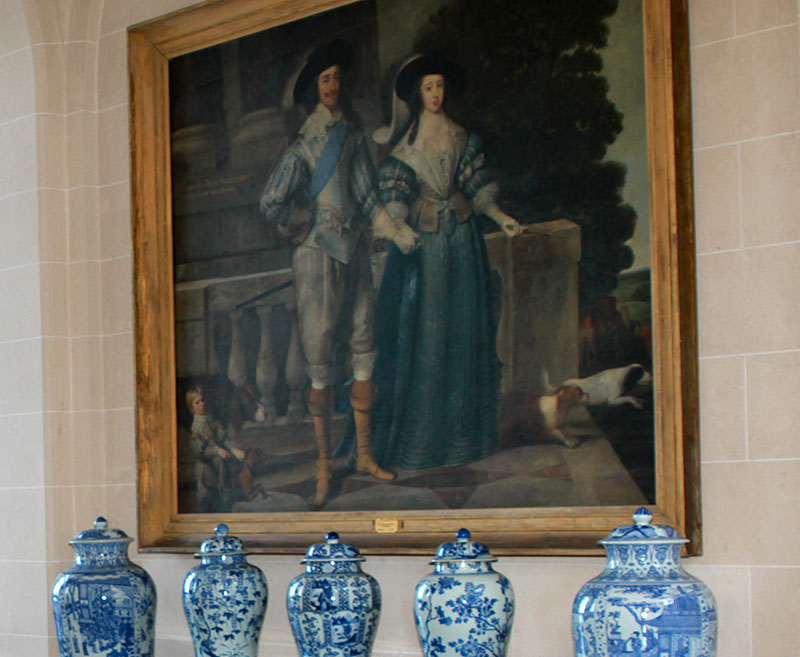 Two paintings by Jean-Baptiste Leprince (1733- 1781) present life in Russia around 1787 – the time at which Prince Charles-Joseph travelled with Catherine II in Crimea. The bronze-plated clock represents Venus in her chariot with an inscription: “L’Amour fait triompher la beauté” translated “Love makes beauty triumph” 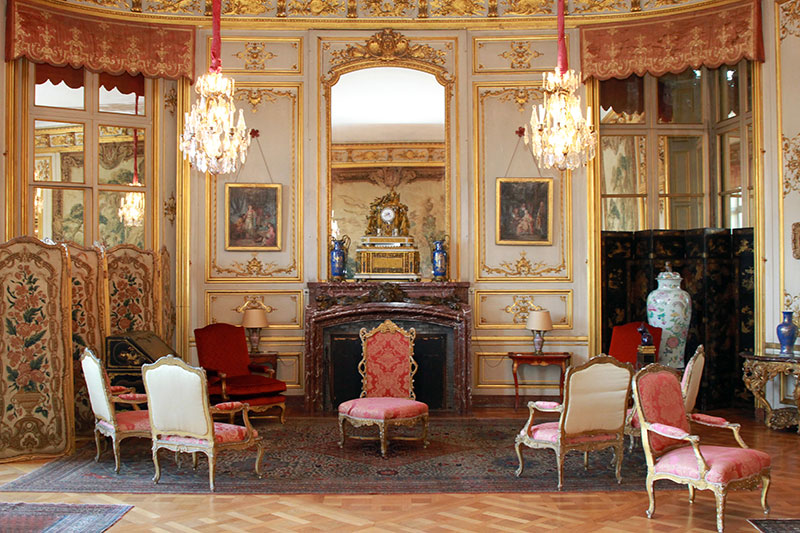 The two tapestries from Beauvais in the Marshalls’ room are made from Boucher ‘s designs (1736) and represent  “Angling” and “The Fortuneteller”. 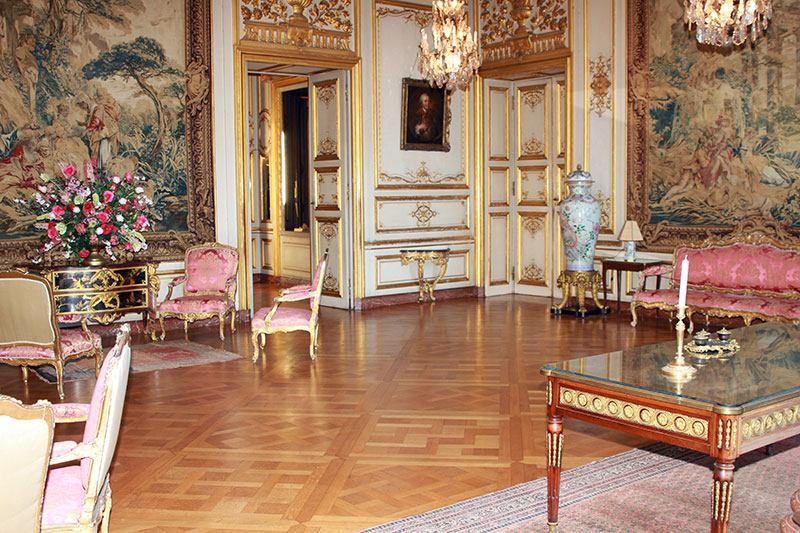 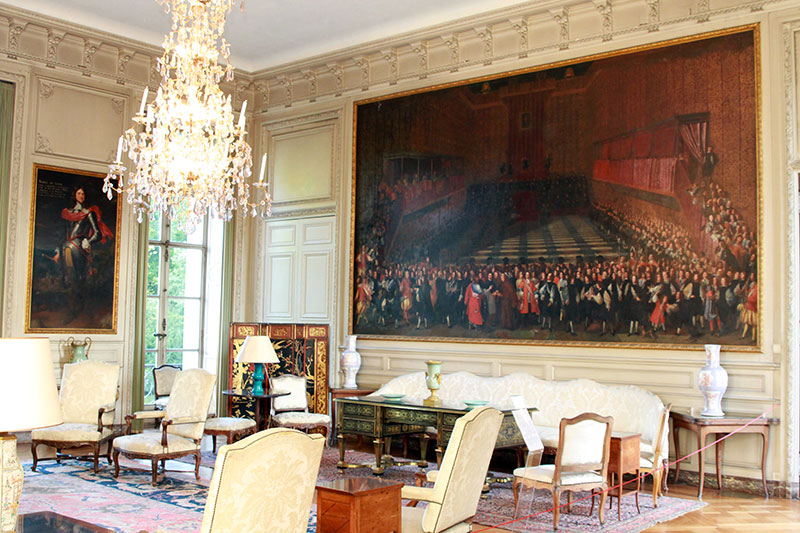 above the chimney place, a scene from the audience in the banqueting hall of the Guildhail, at opposite the opening of the Palermo Parliament, which is presided over by the same Prince de Ligne, who was Viceroy of Sieily. 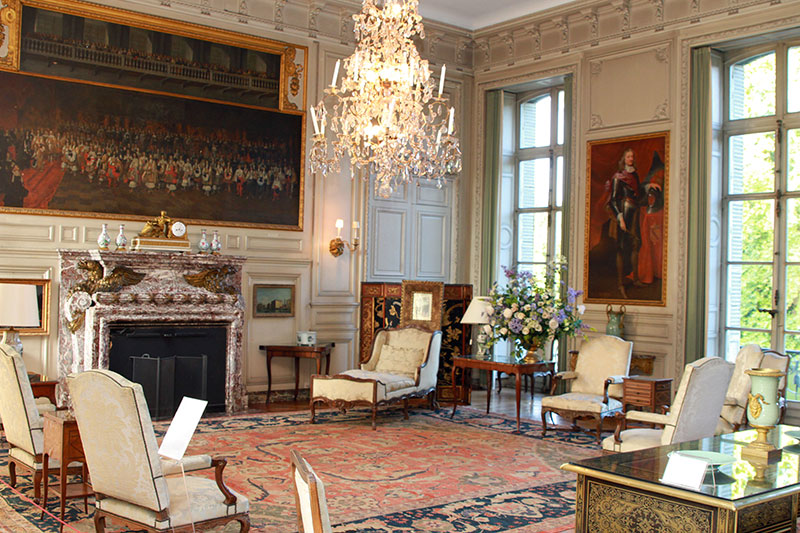 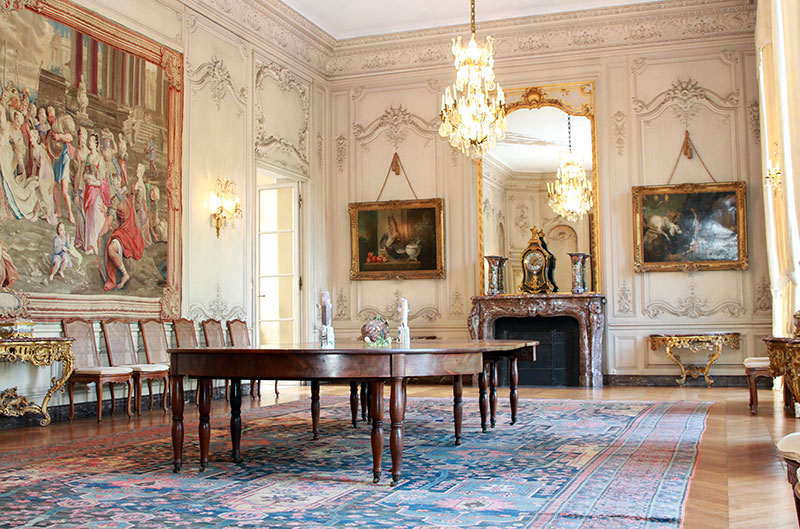 Opposite is a Gobelins tapestry catied “Portière aux Renommées” which bears the arms of France and Navarre, and another bearing the arms of the Cardinal de Rohan-Soubise which depicts the abduction of “Heten of Troy”. A pastel portrait of Mademoiselle H. Gaussin hangs between the windows. 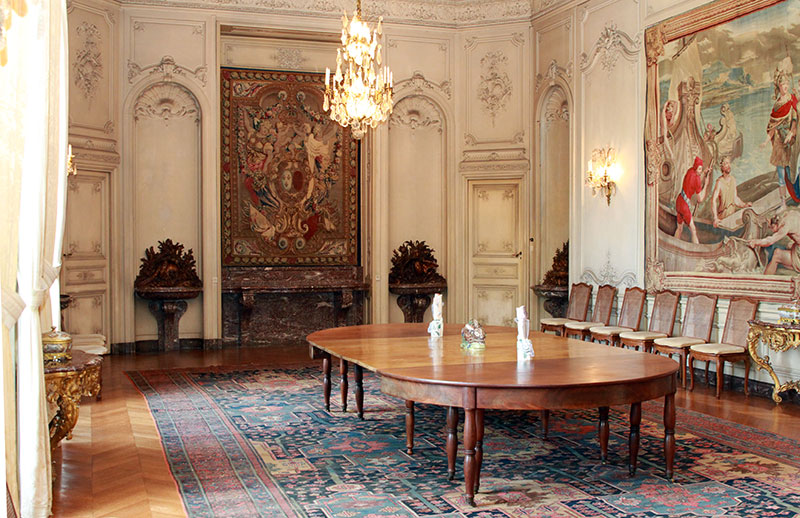 The library in Beloeil gathers more than 20 000 books and precious manuscripts ; some of theme are extremely rare like the “Liber passionis” with the arms of Henri VII of England. A painting of Albert-Henri, second prince de Ligne (1609-1641), remembers us that this man was the creator of this unique library. 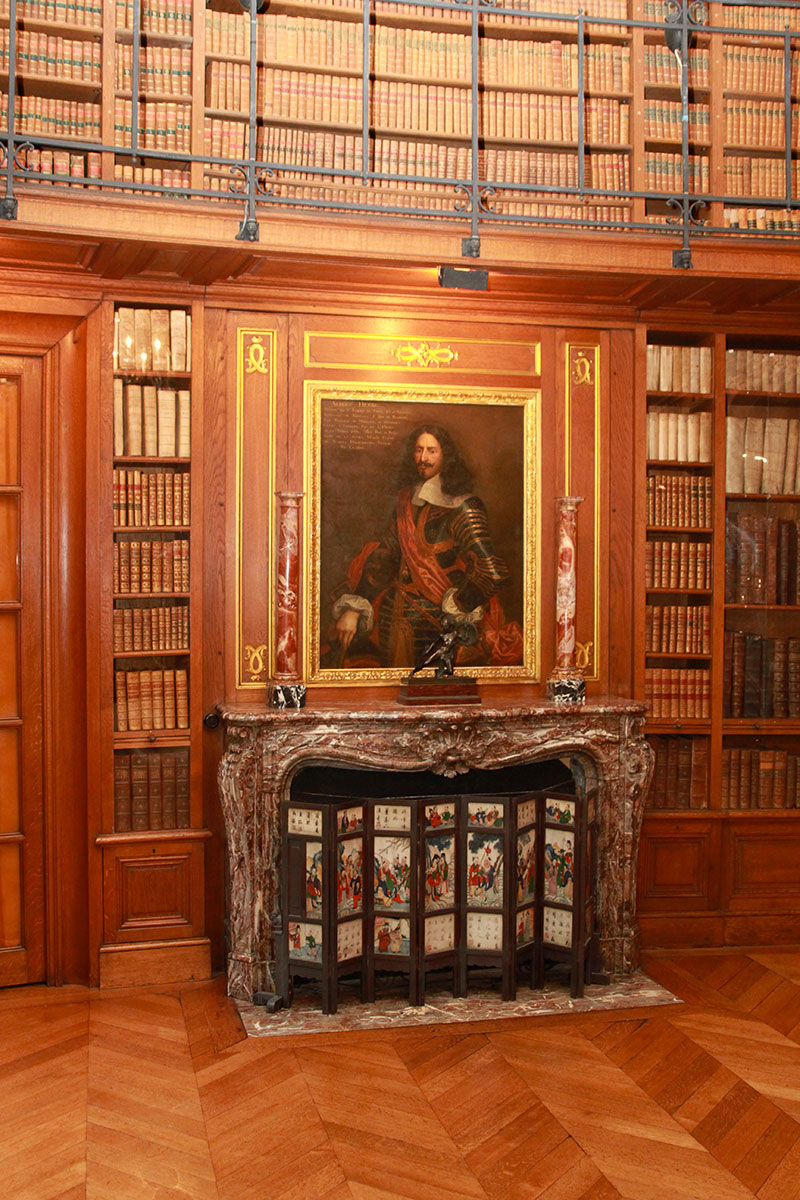 The library of Beloeil is famous for its interesting books but also for the quality of the bookbinding; signed by the most famous masters. Adjacent to the library, a small room contains books of the feld-maréchal Charles-Joseph de Ligne and more than 3.500 handwritten letters, correspondence between him and monarchs or celebrities of his time. 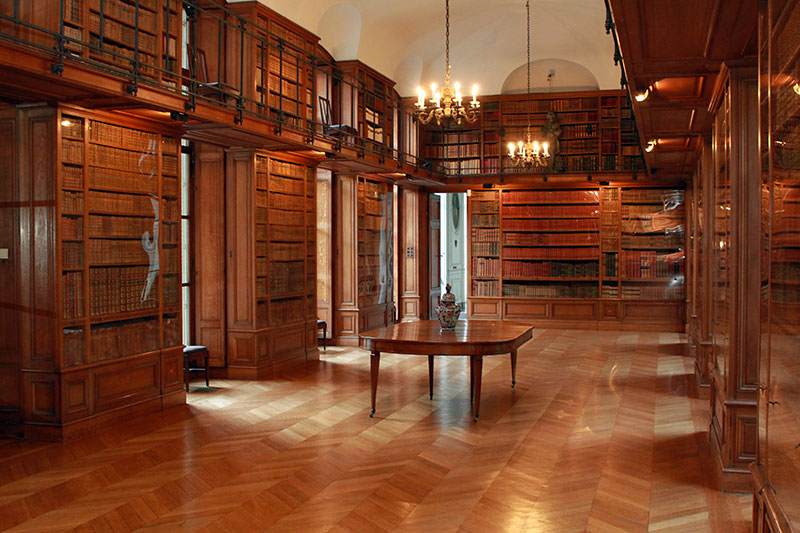 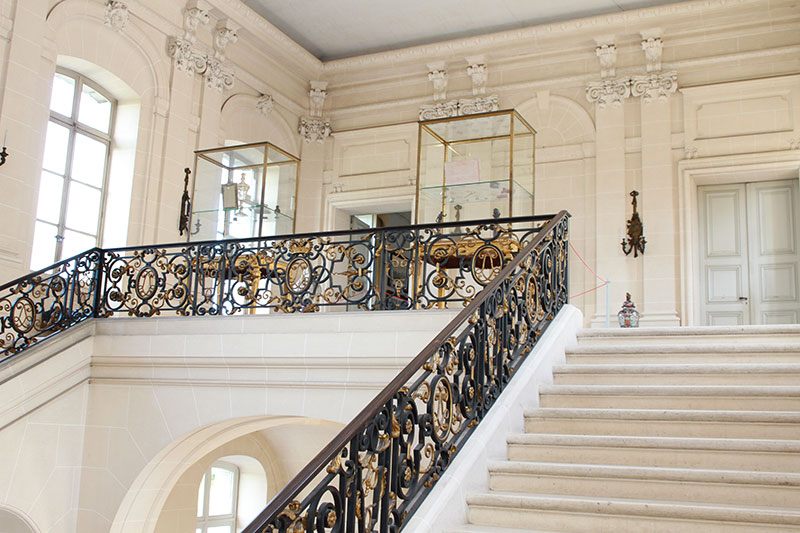 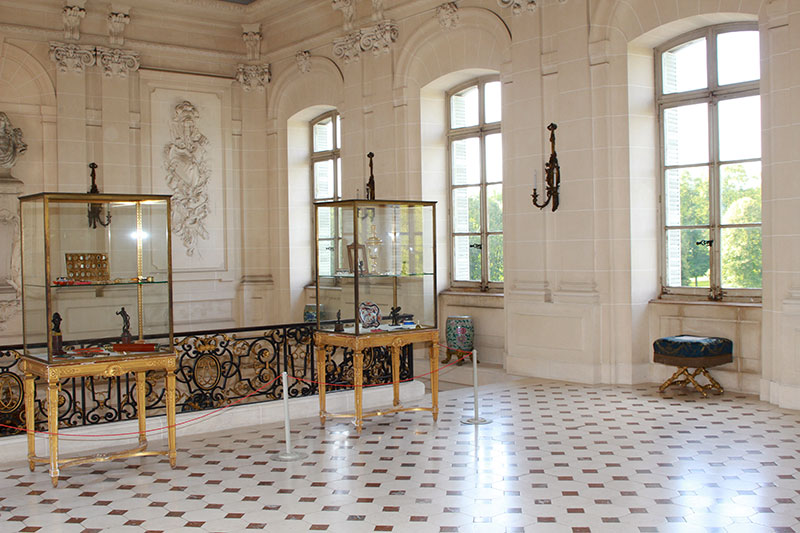 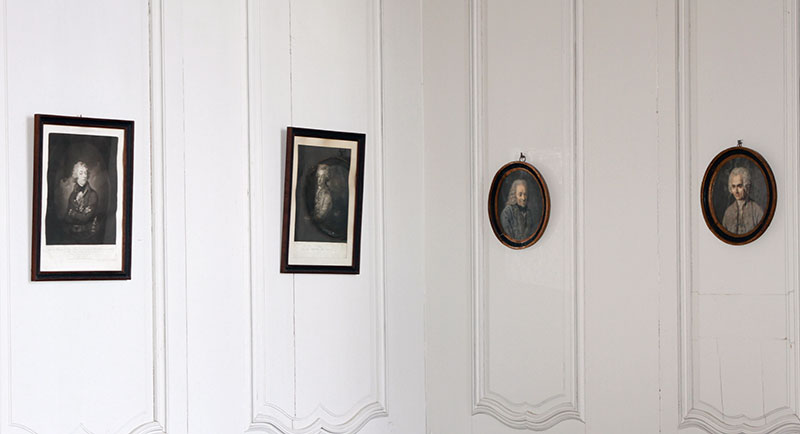 With the wall, a panoply of weapons having belonged to prince Charles-Joseph de Ligne and to his son, with the blazons of the Austrian army. On the chimney, a trust decorated with malachite and gilded bronze (XIXè S.) 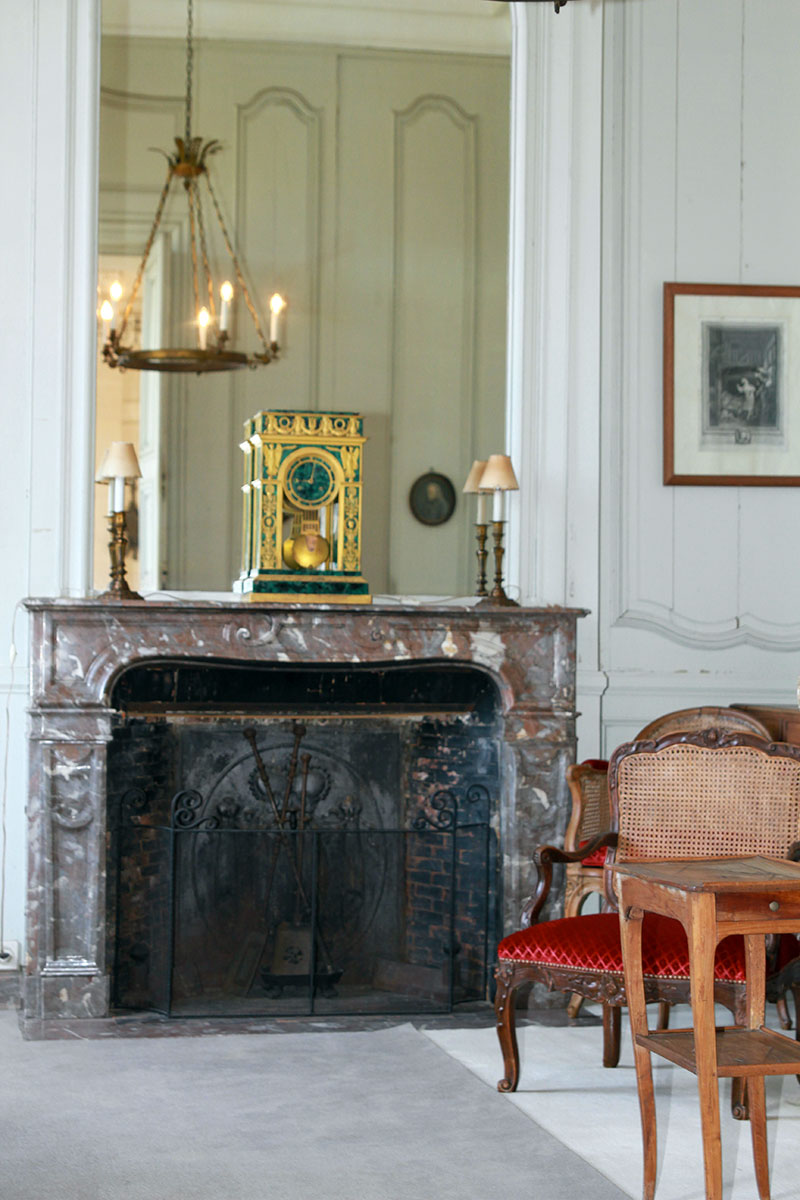 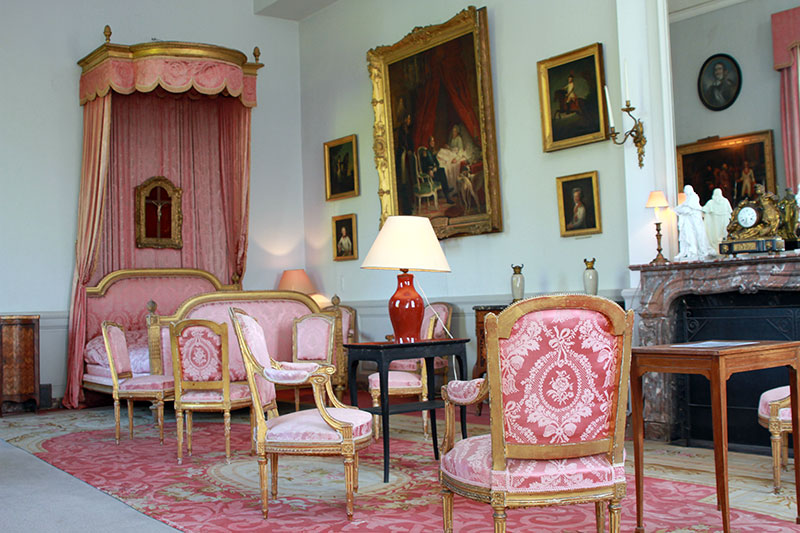 Two rooms in the castle contain artefacts relating to Field Marshal Prince Charles-Joseph de Ligne (1735-1614), the greatest belgian writer of the 18th Century. Some of his personal belongings, his earrings, and the pens with which he wrote his “Memoires” are exhibited on the first floor landing.

The serie of paintings in his bedroom tells the story of various episodes of his life. 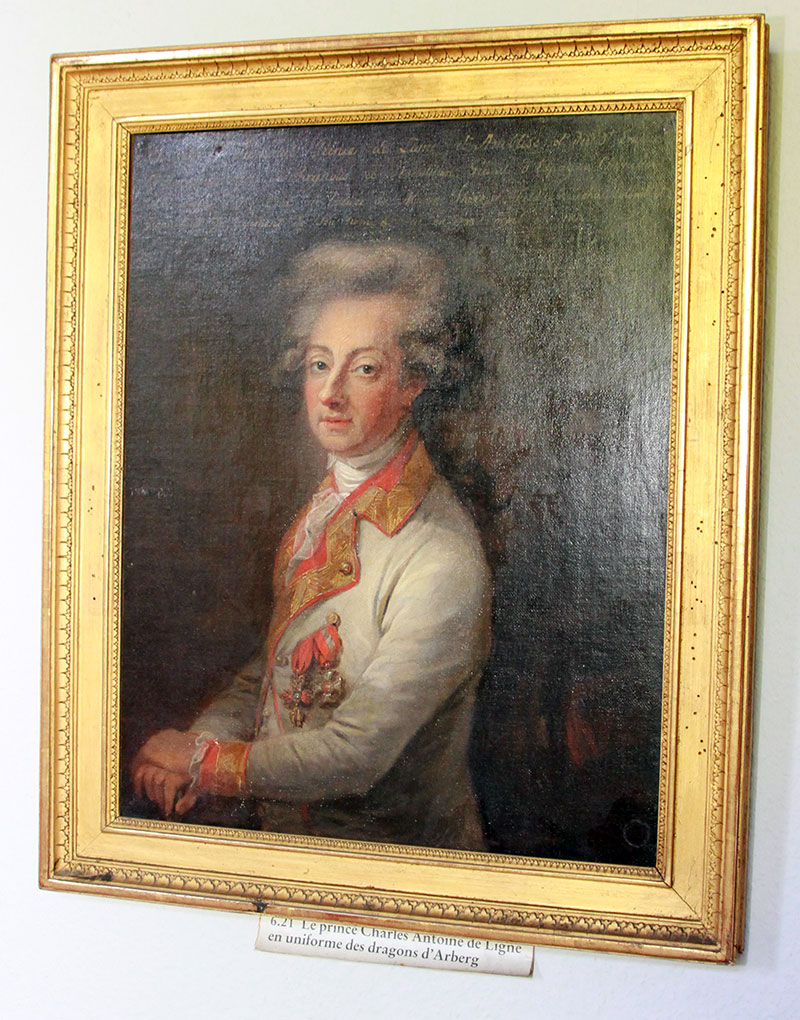 The Epinoy room takes its name from one of the titres of the heirs of the House of Ligne. lts Regency fumiture complements the boat-shaped bed, which is said to have been used by many of the famous guests who stayed at Beloeil. 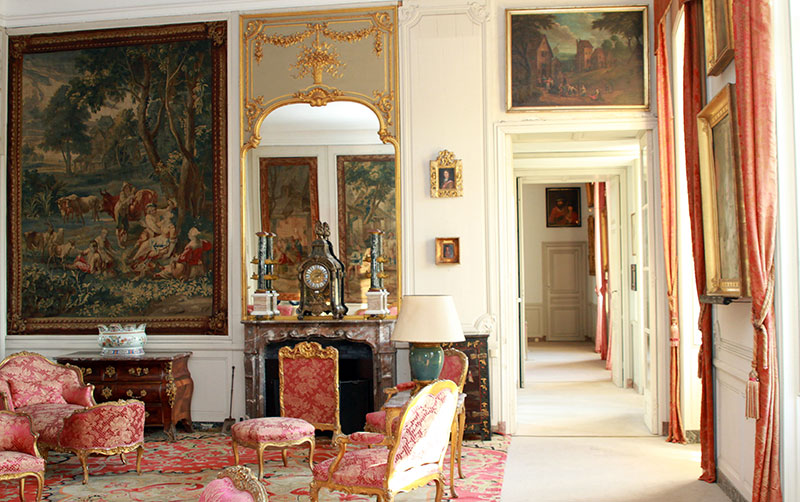 The wide-bordered Brussels tapestries after Teniers (1 7th Century) represent “The May Tree Plantation” and other pastoral scenes. A porcelain wine cooler stands on the Regency chest of drawers. 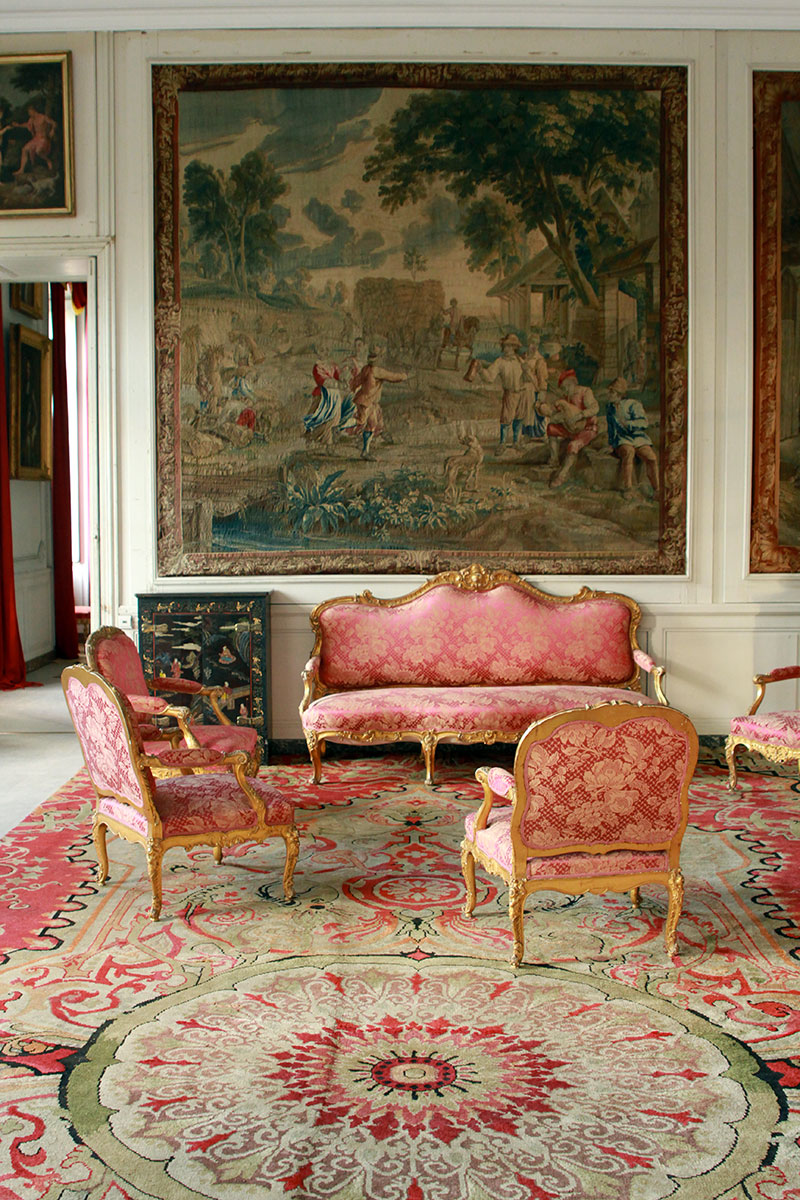 The Amblise room is also named after one of the many titres accorded to the Ligne heirs. lt contains a magnificent carved and gilded wooden bed, which is decorated in Genoa velvet and whose canopy is supported by four eagle heads. The bed resembles the fumiture made by Jacob for Queen Marie-Antoinette. 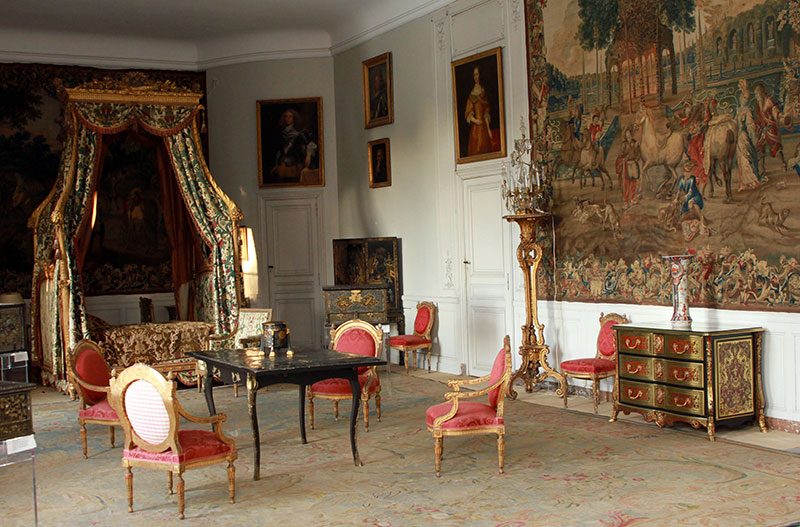 The fumiture in the room comprises a sofa, six “pine cone” armchairs and chairs, a wing chair that bears the stamp of G. Jacob and 18th Century Chinese lacquer cabinets. Three large Lille tapestries, dating from the 17th Century, hang on the wall. 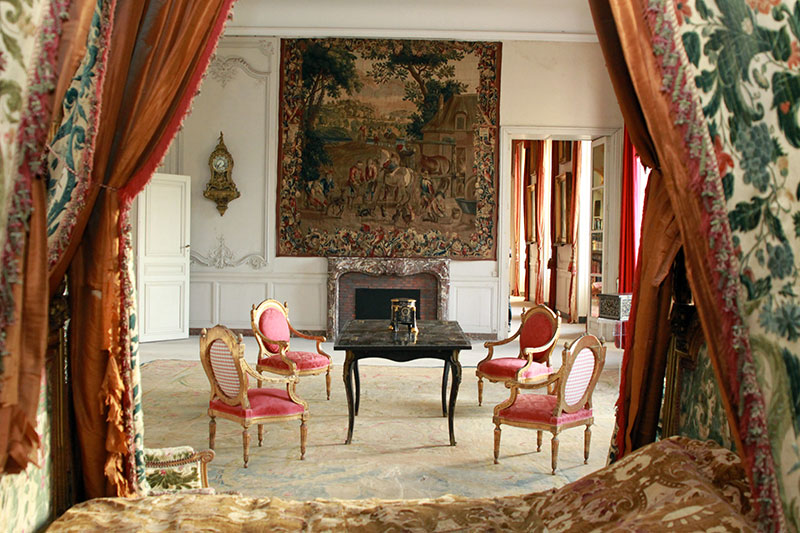 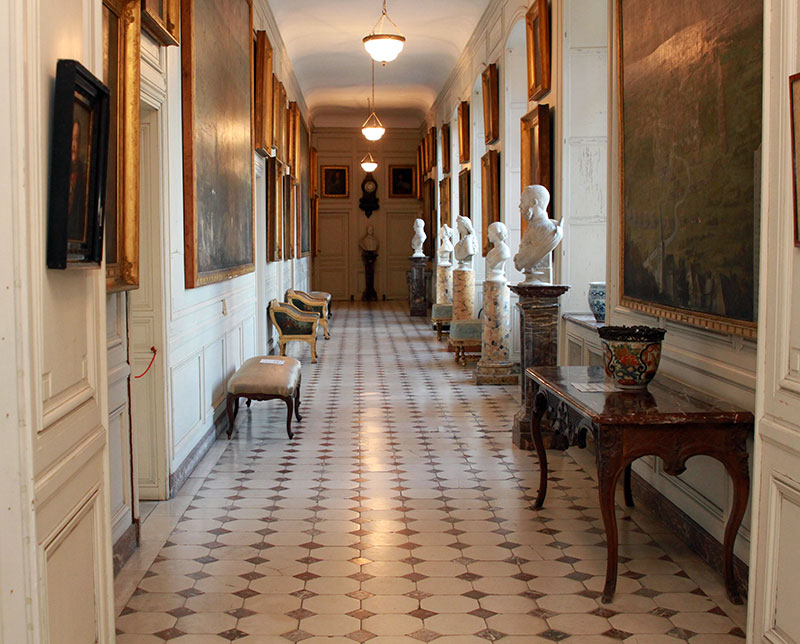 View of the gallery, showing busts of Emperor Franz-Joseph of Austria and the Empress Elizabeth, by Zaluski. The three large paintings depict : 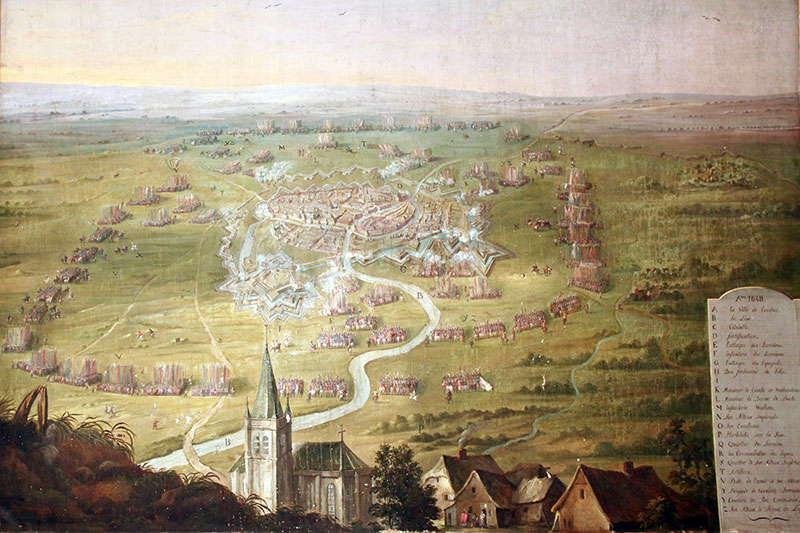 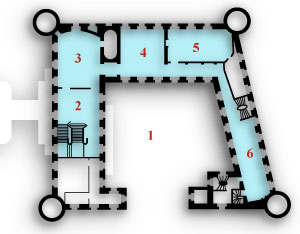 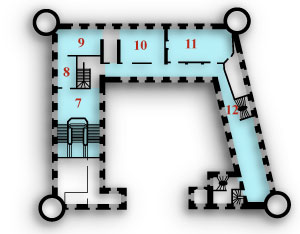